"The closest to reality car that money can buy"
Omhoog 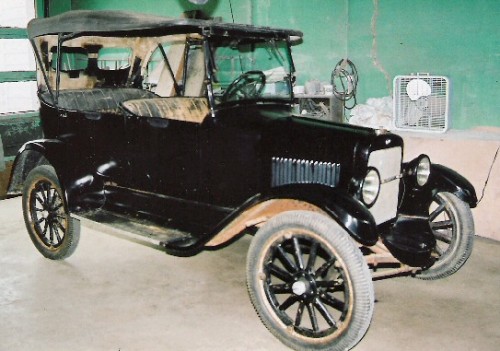 This 1920 Mercer Series 5 Sporting was one of six different body styles available that year. It was designed to be the four passenger companion car to the popular raceabout model. It sold new for $4,200, which was about the price of eleven new Model T Fords.
Omhoog

For 1922 and the following three seasons, the Automobile Club of France elected to limit engine capacity to two liters for cars competing in Grand Prix events. The 1922 race was to take place west of Strasbourg on a triangular course.

The crankshaft was a built-up unit turning in rolling element main bearings but with white metal-lined connecting rods. A major and innovative change lay in the asymmetrical disposition of the valves. A respectable 88 hp was measured at 4,200 rpm. The remainder of the car was quite conventional, utilizing an arched chassis frame with underslung axles.

One car was completed and was tested at Brooklands and at the Tourist Trophy circuit on the Isle of Man, where it was found to be quite as fast as the Sunbeam 3-liter, 8-cylinder cars that won the event. The results gave management every confidence that they had produced a very quick car for the French Grand Prix, and three more cars were built. All four cars were dispatched to Strasbourg for further testing and practice.

During one of the practice periods, the car driven by Segrave sustained damage after a major carburetor fire and spilled petrol. Attempts to contain the blaze were unsuccessful and worse, the hot engine cylinder block was cracked by well-meaning bystanders with buckets of cold water.

The spirit of the team must have been further dampened by the arrival of their arch-competitor Fiat; it was clear the Italian cars were superior. The team decided to lower the axle ratio in order to improve the acceleration of the Sunbeams, but the change caused the failure of all three cars during the race when the engines were over-revved and the inlet valves fractured.

The motives and rewards associated with collecting, driving, and competing in old racing cars vary widely. Last month I wrote about a Ferrari F40 LM, a car for which the purchase criteria were primarily adrenaline, ego, and competitiveness, while this month’s topic is almost the polar opposite.

Though in its day the Sunbeam 2-Liter Grand Prix car was every bit as fast, every bit as scary, and probably more deadly than the F40, the motives for owning it today are far more genteel. By today’s standards, 88 horsepower in a 1,500 lb car isn’t likely to attract much attention, but if your interests tend toward engineering history and what a friend calls “industrial archeology,” then this 2-Liter Grand Prix is a car to drool over.

The entire automotive industry was barely as old as the Ferrari F40 when Sunbeam built this car. Automotive engineering was in its infancy and most of those figuring it out had cut their teeth in the railroad business, so small, light, and high rpm were novel concepts. The majority of what we would today consider common knowledge about what works and what doesn’t hadn’t been thought up yet, much less proven. It was a time of exquisite invention and devastating failures. To those who wonder how we got to where we are now—the development of automotive knowledge—cars like this are endlessly fascinating.

Today we think of Sunbeam as a badge name for a pretty but underpowered and mediocre handling Rootes Group sports car of the early 1960s, the Alpine, and its overpowered and truly evil-handling cousin, the Tiger, but in its glory years, Sunbeam was a formidable company.

It has been called the Jaguar of its time, and in the ’20s, racing success was core to its identity. When it was announced that for 1922 through 1925, the Grand Prix formula would be for 2-liter cars instead of the previous 3-liter ones, Sunbeam hired the hottest designer they could find and told him to build a world-beater. This car is the result.

Ernest Henry chose a twin-cam, four-valve, four-cylinder concept. It was exotic, but Aston Martin and Ballot used similar designs, Fiat used a DOHC six, and Bugatti a single-cam straight-eight. You’ll note that I’m talking about the engines here, and there’s a reason. At this point, there was little innovation or sophistication in drivetrains, suspensions, or tires (a 3.5″ x 31″ tire was typical); it was all about horsepower, light weight, and not breaking down.

The Strasbourg race was a classic. It entailed 60 laps of an 8.3-mile course for a 500-mile total, and the course was basically three straights and three sharp corners, all on an unpaved surface. Fast lap was 87 mph; the winner averaged 79 mph over 6 hours, 17 minutes; 18 cars started and four finished. Of those not finishing, there were eleven engine failures and three crashes, with one driver killed. Two of the crashes, including the fatality, were caused by rear axle failure. It was, in a word, brutal.

As was the case at the time (and frequently since), the Italians were the ones to beat. Fiat won handily, finishing more than an hour ahead of the second-place Bugatti. The three Sunbeams that started broke early trying to keep up with the Fiat’s superior horsepower (94 hp vs. their 88). After the race, all four Sunbeams went back to the factory to be repaired and, interestingly, all have survived to the present—probably the only early factory team to do so. It helped that the cars were fixed but immediately retired, the designer fired, and a different car designed for the 1923 season.

An 87-year-old car is in many ways like an older person; you certainly don’t expect them to run and jump with the young folks, but they can be fascinating to be around. The advantage of old cars over people is that they can still be in their prime (if more fragile and challenging to keep going) but also show us much about their world.

It’s like being able to hang out with your grandfather when he was 20 and a wild young lad. As I said, this represents a different set of motivations and rewards from buying 850 hp worth of death wish, but it certainly appeals to the more contemplative collector.

There is a limited market for the Sunbeam 2-Liter Grand Prix, but it’s matched by a limited supply, and the value range seems to bracket what this car sold for. The buyer faces a lot of restoration costs, which means he might have been a little brave with his paddle, but it was done for the right reasons. I’d say fairly bought and sold.